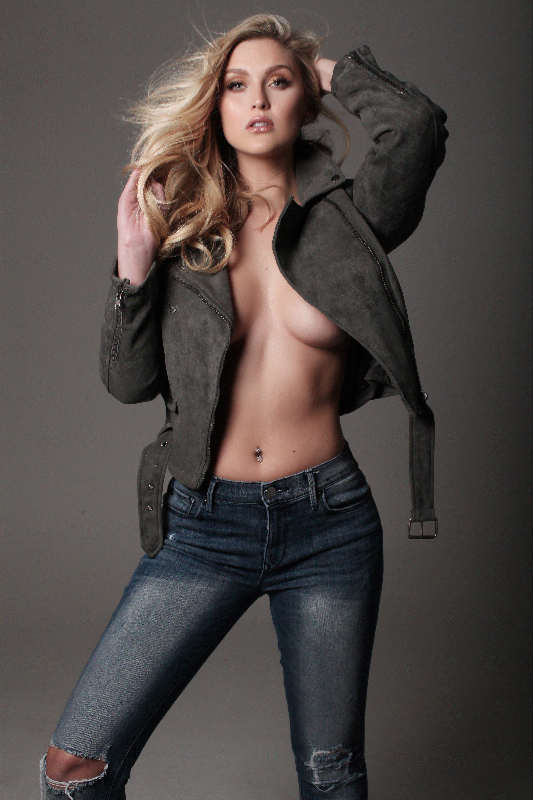 In this industry, you’re judged solely on your appearance and your measurements. It sounds superficial (it is superficial), but that’s the way it is. It’s very black and white, but I’m inspired by the gray.

When I was 19, I walked into my first open call. I had zero experience, but looked at the modeling industry with stars in my eyes. When I met with the owner of the agency she sat me down, looked me in the eye, and told me I didn’t have what it took to be a model.

Three months later I prepared for my first fitness competition. I lost about 45 pounds and became the coveted size double zero. My sister took photos of me in our living room, and I resubmitted the images of my “new body” to the same agency. They asked me to come in, and when I arrived, I shook the hand of the agent who previously denied me. For the second time, she looked me in the eye. But this time, I was signed on the spot.

I quickly learned that in order to have a modeling career I needed to maintain my frail figure. I worked with some incredible companies, met amazing people, shot with talented photographers and felt like I had what it took to make a career out of modeling.

Shortly after being signed I competed in my first pageant and claimed the title of Miss Arizona USA. My body transformation opened up doors that I never imagined could be possible. I felt invincible. There was nothing I couldn’t do.

I didn’t realize that subconsciously I was terrified of gaining weight. I was working out 3 hours each day and wasn’t eating nearly enough calories. I took multiple fat burners and my body’s natural metabolism slowly crashed.

During this time I began prepping for the Miss USA pageant. My stress level was at an all time high. I slowly began gaining weight even though technically I was doing “all the right things”. My trainer at the time brought up the concept of metabolic damage. I had self-destructed to such an extreme, yet all I could do was focus on my weight, becoming extremely self-conscious. Every time I walked into a shoot I would pray that the people behind those doors wouldn’t criticize my waistline. I prayed they would still think I was good enough.

I’ll never forget a particular shoot that scarred me. I was modeling for a client for whom I previously worked for. I began to try on their clothing, but all the bottoms were a size 0/XS and barely fit. I was so uncomfortable and it showed on camera. With each outfit change I became more and more self-conscious. The client was unhappy, and I felt like I was going to burst into tears at any moment. One of the owners approached me and said they were ending the shoot and sent me home.

I’ve never felt more humiliated in my life. I took a long break from modeling after that day.

Eventually, I was signed by a wonderful agency. They were patient with me, and in an industry driven by constant turnover, I felt blessed to find such a rarity. They let me shy away until I became comfortable enough to be back in front of the lens.

It has taken me a few years to get my confidence back, and to learn how to love my body. Exactly as it is. I’m 23, I have curves, I’m a size 6, and I’m proud of the progress I’ve made. I’ve learned self-love, and I’ve realized that beauty comes in all shapes and sizes. 3 months ago I made the decision to give modeling another shot in NYC. With the support and encouragement of my agency, I felt like I was ready to see if I had what it took to survive in this competitive market.

My excitement and optimism quickly turned into frustration and confusion.

To summarize- the modeling industry is broken down into two distinct categories: You’re either a “straight-size” model (0-4), or a “plus-size” model (10 and up). Agencies use different terminology, but essentially your measurements need to fall within these brackets in order to be represented.

I learned that my sizes are too “in-between.” I’m a size 6. So either I need to lose weight and be a “straight-size” model, or gain weight so I can become a “plus-size” model. My current build doesn’t cut it. Which made me think- if I attempt to change my body (again) solely to be accepted by an agency, then ultimately I’m going to be the one suffering.

The modeling industry has created an impossible standard of beauty. You need to have clear skin, long hair, a tightly toned body, big boobs, a bubbly butt, and cellulite free legs. But let’s be honest; every marketing campaign that uses these “perfect” girls, edits them to perfection. Their skin is airbrushed and a lot of the time they’ve been edited to appear even thinner than they naturally are. We’ve seen influencers come out in recent years showing side-by-side photos of the edited and unedited photos. They don’t even look like the same girl. There’s been quite a few times where I’ve gotten photos back from a shoot and I’ve barely even recognized myself.

I’ve seen girls in this industry suffer from eating disorders because they are fearful of gaining weight. I’ve also seen girls pushed to gain an unhealthy amount of weight just so they can become a “plus-size” model even if that’s not natural for their bodies. And I’ve seen plus-size models body-shamed for being “too voluminous”. Essentially, no one is good enough in the eye of this industry.

Beauty comes in many forms, in all shapes, sizes, and ethnicities. Shouldn’t that be celebrated? Shouldn’t authenticity be glorified?

I knew a woman with similar body measurements to mine get picked up by a New York agency. I saw a behind-the-scenes photo of her where she had pads duck-taped across her entire body. It dawned on me that the photographers had to manipulate her body so she would appear bigger than she actually is. I started doing some research and learned “it’s not uncommon for models to advertise plus-size clothing lines they themselves would not fit into. Many of these “smaller” plus-size models use body padding to effectively size up, because clients want a plus-size body but a thin face”. Why in the world would this be okay?

Here’s an idea- how about we use models of all shapes and sizes that are just healthy? We are born with different genetics, various body types, unique qualities. Let’s fricken worship that. Imagine if the modeling industry became more transparent and realistic. Imagine if we began to promote healthy models instead of creating fake impersonations. Maybe then the standard of beauty would begin to change. Not only would this empower women, it would help women realize it’s okay to love yourself just the way we are.

Let’s look at the facts

16 is the average woman’s size in the United States.

91% of women are unhappy with their bodies.

80% of women feel insecure when seeing models in the media

8,000,000 individuals in the United States are suffering from an eating disorder

I believe there’s a direct link between women’s insecurities and the modeling and fashion industry. No matter what size you are, if you’re a woman, you’re essentially told you’re not good enough.

I remember the feelings I had growing up looking at every woman in the media, and wondering why I didn’t look like them. It’s become my mission to create a conversation, and spark change in the industry so young girls today and in generations moving forward, see it as “authentic” instead of “fake”. I want them to know that being “perfect” is unrealistic and it’s okay to embrace and celebrate what makes you unique. I want to go to a runway show and see diverse body types. I want to flip through a magazine and be empowered by the wide-range of beautiful women.

I understand the modeling and fashion industry keeps the expectations of women extremely high. The talent selected by each agency represents a tiny decimal percentage of the population. But wouldn’t they become more relatable including models who represent the sizes in-between “straight-size” and “plus-size?”

In this industry, you’re judged solely on your appearance and your measurements. It sounds superficial (it is superficial), but that’s the way it is. It’s very black and white, but I’m inspired by the gray. Thanks to models like Iskra Lawrence, Ashley Graham, Kate Upton, Chrissy Teigen, Bree Warren, Mia Kang, Bryiana Dyrdek, and many more inspirational, outspoken, powerful women- we see an incredible change beginning to happen.

Companies, agencies, designers and models are starting to realize this self-love, body-positivity movement isn’t just a trend. It’s the way our world’s turning.

I’m inspired by companies like Dove and Aerie, for not retouching their images, and focusing on their models’ true beauty. Consumers feel empowered, and I urge other companies to follow their lead.

World-renowned agencies such as IMG, Wilhelmina, Jag Models, and Muse Management are beginning to expand their board to accept various sizes. The industry is moving in the right direction.

I refuse to put my body through hell ever again just to become “beautiful” in the eyes of the industry. I’m healthy. I’m strong. But most importantly, I’m confident. And that’s enough for me. I’m excited for the day that confidence is enough for you.

2 thoughts on “An Open Letter to the Modeling & Fashion Industry”