Every year I, like many of you, write down resolutions. The No. 1 thing on my list in 2018 is to get healthy both mentally and physically.

I realize mental health isn’t something most people like to discuss, especially with strangers on the internet. But hey, I created this blog so I can be real with you, so no topic is off limits. Our society views “healthy” as someone with a perfect body. But I think it’s much more than that. In order to be “healthy” you need to balance physical health with emotional and spiritual health. Many of us set goals so we can look a certain way, but why don’t we set goals to feel a certain way?

2013 was one of the best years of my life but came with an overwhelming amount of consequences that I’m still suffering from. I was struggling with severe stomach issues for 2 years, and felt I had no control over my life. I was a freshman in college, but I spent more time at the Mayo Clinic and at my parents house than I did at school. The stomach pain was so severe I struggled getting out of bed, I barely socialized with friends, and was so desperate to just feel “normal” again. After countless medical tests, scans, and misdiagnoses’ I attempted to take my health into my own hands. I found a trainer who struggled with Crohn’s Disease (similar to what I have), yet seemed to function completely normal. I confided in him, and he swore the more I exercised the stronger my body would become and the more I could manage my symptoms. Over time the gym became my sanctuary. I looked forward to sweating everyday and I began feeling significantly better. Given, my diet was extremely limited but for the first time in my life I was seeing physical results in the gym. I was surrounded by fitness competitors, and I admired their dedication to the sport and their insanely ripped bodies. At that time, these individuals were my definition of “healthy” (lol). After 3 months at this gym, I decided to prepare for a bikini competition. I was more determined than ever and became extremely strict with my regimine. I exercised 7 days a week, averaging around 3 hours at the gym, and pushed myself until I was shaking and light headed. All I thought about was the gym, and I fell in love with the process of watching my body transform. The endorphins gave me a natural high, and I thought I could keep-up with that lifestyle forever.

Although I was over-excerising, my diet was the most damaging part of my training. Before the fitness competition, my diet consisted of:

As I look back on that time, I can’t believe I ate the way I did. I was burning hundreds and hundreds of calories every day at the gym, but wasn’t eating nearly enough to keep my body stable. To top it off, I was taking fat burners, which are basically an unnatural amount of caffeine in pill-form, so your body is constantly burning even when you’re not at the gym. I felt drained, but I also felt sexier than ever before because of the attention I was recieving. People were constantly reaching out asking for tips so they could look like me, and be “successful” like I was. 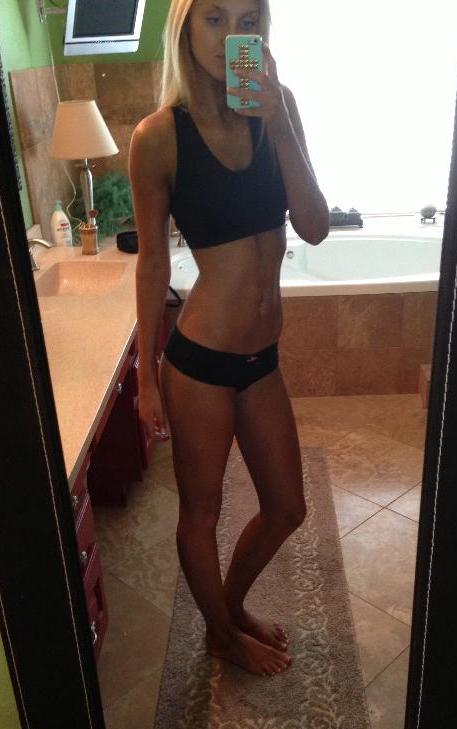 I lost over 40 pounds in 3 months. When I stepped on stage at my fitness competition I was under 100 pounds. For reference, I’m 5’10, so I should never be under 100 pounds. I was frail and weirdly proud of it. I placed 5th overall, and was approached by a judge afterwards who told me I should be walking in the Victorias Secret Fashion Show, which I took as a huge compliment.

My hard work was paying off and my wildest dreams were coming true. I was signed by a modeling agency and I won Miss Arizona USA 2014. From the outside, people thought I had it all, mainly because of my body. Little did anyone know, I was falling apart mentally. I began to equate my weight with my self worth; the thinner I was, the more valuable.

I avoided going out or spending time with friends because I didn’t want to be tempted to eat or drink something that would compromise my figure. All I thought about was calories and training. When I attempted to introduce “normal” foods back into my diet I would get sick. Even attempting to eat turkey, chicken, or protein powder was a struggle. My body couldn’t tolerate or digest anything and I started gaining weight back. I remember stepping on the scale at 107, and feeling disgusted with myself. I had torn both labarums in my hips while training, which suddenly made it hard for me to walk and I definitely couldn’t run. Cardio became painful but I kept doing it because I figured it would keep me small. At this point the negative self talk was at an all time high, I constantly thought to myself, “If I gain any more weight, I’m going to lose everything.” I trained harder. I went back to my previous diet. I took fat burners, but nothing worked. My stomach pain increased daily and no matter how hard I trained, the scale was only going up.

My new trainer, Scott (if you live in AZ I highly recommend him), instantly realized all I cared about was the number on the scale. Since I was preparing for Miss USA, it would have been easy for him to push me to exhaustion and give me tricks to fool my body for a few more months. But he didn’t, he encouraged me to strengthen my mental health, and stop pushing myself so hard in the gym. He was the first fitness professional to educate me on the importance of self love and confidence. Looking back, I wish I would’ve implemented his advice to repair my metabolism and focus on my mental and emotional health more than physical. I was so consumed with doing whatever it took to be a size “0” before Miss USA, that I couldn’t focus on anything else. I didn’t lose the weight, and I competed at a size 4. I was considered one of the “bigger” girls at the competition.

My physical and mental health went out the window after Miss USA. The gym was no longer my sanctuary, it was now a means for punishing myself. If I went out with friends, had a drink, or ate something I “shouldn’t”, I felt guilty and spent hours trying to work it off. It was such an unhealthy cycle and I was trapped.

All of this was happening while my life looked perfect on the outside. Of course no one shows their struggles on social media, so instead of turning to get help I kept up a viscid and hoped it would get easier. Don’t get me wrong, I had so many positive things happening in my life and I am so thankful for my reign. However, if I could go back there’s a lot I would change, beginning with telling myself to chill the F out. When I passed-on my crown, I essentially gave up pushing myself in the gym. It was frustrating not to see results, so I avoided it all-together. When I turned 21 I let go of my routine and decided I was just going to have fun. I surrounded myself with friends, went out to clubs every weekend, traveled all over the country, and had the time of my life. But my new routine of not caring wasn’t working either. I went from one extreme to the other and my body broke down.

To this day, I’m still trying to repair my metabolism. Because of my torn labarums, I will need double hip surgery in the near future. I torchered my body because I thought the smaller I was the happier and more successful I would be. Let me tell you something, even when I was at my smallest, I still wasn’t happy with myself.

In 2015 and 2016, I wrote “get healthier” as my new years resolutions. But as each year passed, I was frustrated because my body didn’t have that “unbelievable change”. My only goal was to get that “perfect” body back.

In 2017 I made the resolution to do everything I could to fall in love with myself. Sounds weird I know, but I realized I would never be perfect so I was setting myself up for failure. I needed to learn to love myself in every phase of my health journey in order to be the best ME I could be. I transformed dramatically in 2017, because I began practicing self-love every day. I was proud of myself for my growth, and I began exercising again because I loved my body, not because I hated it. I journaled, I cut out negative people in my life, I limited social media, and I believed in myself.

I still battle with insecurity at times, but I’ve never felt mentally, emotionally, or spiritually healthier in my life. This shift changed everything. My relationship with myself and with others has improved dramatically and I no longer feel like I need to hide who I am or how far I’ve come.

Being vulnerable is scary, but I share my health journey with you because I know I’m not alone. I believe the majority of women reading this post will be able to relate to me in some way. But most importantly, I want this post to show you that I’m not even close to perfect. I don’t want to be another girl on your instagram feed that makes you feel less than. I’ve said this before, but social media isn’t reality. No one shares their struggles, failures, and insecurities online. It’s easy to get lost in comparison when looking at someone else’s “highlight reel” but the truth is that NO ONE is perfect.

We’re all beautifully and wonderfully made and it’s the year that we begin celebrating that. I want you to join me and become healthier mentally and physically in 2018. Become the best YOU possible, but don’t sacrifice your health to obtain an unrealistic standard of beauty. Learn to appreciate and love the skin you’re in, and watch your entire life transform.